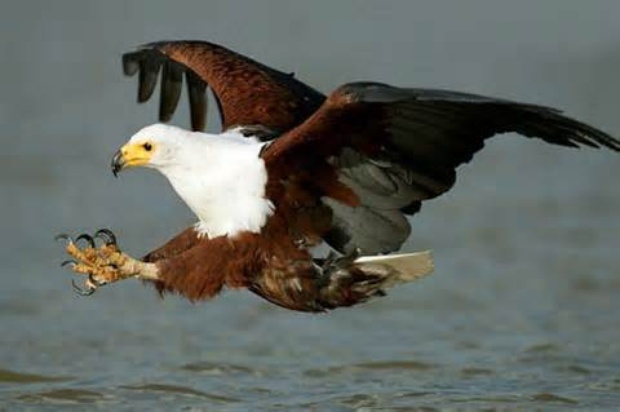 We are so excited at Macker Riverbend – a pair African Fish Eagles have made their home at Mackers – we hear them all the time. Our birding experts have confirmed our sighting. At Mackers we have a wide variety of bird life. The Kruger Park, a mere 24 kms away, it is without doubt the finest birding locality in southern Africa.

For the birder, the high diversity and density of bird species is the great attraction. The wide range of habitats is responsible for a bird list of over 550 species, while the productivity of these habitats is such that many species occur in abundance. The Park is especially good for large raptors which are rare outside of extensive conservation areas, while many other scarce and migrant species are attracted to it's unspoilt wilderness.

Be sure to book your stay at Mackers Riverbend next time you wish to visit the Kruger National Park – we will do the rest…. Come and ‘bird’ with us, relaxation does not get any better than this beautifully appointed and scenic destination.

A bit about the African Fish Eagle
Widespread in South Africa, the Fish Eagle is particularly common in and around some of the Rift Valley lakes. So well known and clear is the call of this bird that it is often known as "the Voice of Africa".

A handsome bird, the African Fish Eagle is easily recognised by its pure white head, the striking contrast between the white upper-body and tail, the chestnut belly and the black wings. The sexes look alike but the female is the larger of the two.

The African Fish Eagle is most frequently seen sitting high in a tall tree from where it has a good view of the stretch of river, lakeshore or coastline which is its territory. Near a lake with an abundant food supply, a pair may require less than a km² of water to find enough food, whereas next to a small river, they may require a stretch of 25km or more.


QUICK FACTS
Size
Range mass: 2 - 3.6 kg.
Range length: 63 - 77 cm.
Range wingspan: 175 - 210 cm.
Habitat
The African Fish Eagle is most frequently seen by the rivers, lakes and coasts of Africa south of the Sahara. Near Lake Victoria and the other great lakes of Central Africa it is to be seen in large numbers. The African Fish Eagle is usually seen in pairs inside and outside the breeding season, even sharing kills made by either of them. They spend more time perched than flying, and usually settle for the day by mid morning.
Distribution
Widespread in South Africa, the African Fish Eagle is particularly common in and around some of the Rift Valley lakes.
Diet
Their main food is fish, sometimes dead, but mostly caught live. Catfish and lungfish are among the most frequent. They also catch and eat some water birds, including their young. The birds most frequently taken include ibis, storks, herons and spoonbills and especially the Lesser Flamingo. They also eat some carrion. Live caught fish account for about 90% of their diet.
Socialisation
The African Fish eagle usually lives in pairs and spend most of their time perched on branches, overlooking water. Extremely effecient hunters, they only spend little time hunting and most of their day at leisure after a successful kill made early in the day.
Life Expectancy
12 to 14 years in the wild, up to 40 years in captivity.
Predators
Primates, Nile Monitors and Snakes.
References
Krugerpark.co.za; eol.org; BBC Nature and arkive.org.