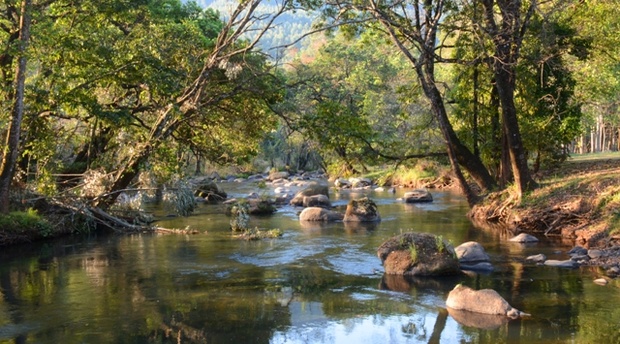 Come and get away from it all at Mackers Riverbend. Riverbend Cottages are nestled amongst indigenous bush teeming with birdlife, perched on a hill above the Sabie River on the R536 Sabie - Hazyview Road.

The three private cottages are well appointed and fully equipped for all your self-catering needs, including your braai area in the garden. Ideal for tranquil break-away or family groups with lots to see and do.

1 Blue swallow
Considered to be South Africa’s most endangered bird, blue swallow can be found, if you’re lucky, in the montane grassland at Kaapsehoop.

2 Wakkerstroom
Some 20 of South Africa’s 35-odd endemic bird species occur at Wakkerstroom, with its mixture of grassland and wetland habitats. Summer is the time to see the grassland species when they are easily identified in their breeding plumage.

3 Mac Mac duet
At Mac Mac Falls, the Mac Mac River splits into two and the columns of water plummet side by side for 65 metres into a pool in the gorge below. It’s one of many magical falls in the area.

4 Lisbon’s double stream
For the best view of Lisbon Falls, walk along a footpath to the base of the falls, which tumble in a double stream, 90 metres high, over a semi-circular rock face.

5 Berlin Falls
The mighty Berlin Falls are the most spectacular in Mpumalanga, which has numerous to boast of. The water cascades 80 metres over a cliff and into a deep green pool below. You can’t get too close too the falls, but an observation platform offers great views.

7 Kaapsehoop
The village is the sort of place you’d miss if you hadn’t been told about it. The houses are built among rocky outcrops and against a hill, and you can’t see them from the main road. Kaapsehoop’s wild-horse population is the main attraction, but the hamlet also offers great food, intriguing shops and a fascinating walk to a lookout point over the Barberton basin.

8 Songimvelo Game Reserve
Little known and one of the most scenic reserves in the Lowveld, Songimvelo on the border between Mpumalanga and Swaziland, offers nine-day horseback adventures in big-game country. If your guide is Steven Rufus, be prepared for a great adventure as he’s a white-knuckle rider.

9 Mpumalanga trout
Dullstroom is, unofficially, the fly-fishing capital of South Africa. The dams and rivers in the area are well stocked with rainbow and brown trout – but that doesn’t mean the fishing’s not a challenge.

10 World’s oldest rocks
It’s always difficult to visualise just how old the earth is; we can’t count to one million, let alone get our heads around 3 400 million years ago. But if you go to Barberton, you’ll be able to see some of the world’s oldest rocks that formed in that age. You can take a walk through these Achaean formations on the 1,5-kilometre Fortuna Hiking Trail, which also boasts 100 species of trees.